Scientists at Natcore Technology have developed a black solar cell that absorbs 99.7% of available sunlight. This is a significant improvement over the anti-reflective coatings now used on solar panels.
Technology Licensed from NREL

Natcore and NREL have also agreed to enter into a Cooperative Research and Development Agreement to develop commercial prototypes that embody NREL's black silicon inventions.

Why Care about Black Solar Cells?

“Black solar” refers to the apparent color of the surface of a silicon wafer after it has been etched with nano-scale pores. The etching takes place in a matter of a few minutes in a liquid solution at room temperature. Adding the pores increases the amount of light absorbed by the cell. When nearly all the light is absorbed the cells appear totally black.

For solar cells, minimum reflectivity is desirable because sunlight that is reflected, rather than absorbed, is "wasted." The reflectivity of a polished silicon wafer surface approaches 40%, giving the wafer its shiny appearance. Adding the industry's typical anti-reflective coating reduces the average reflectivity to approximately 6% and gives the cells their distinctive dark blue color.

Black solar cells have been studied since the 1980s because of their potential for significantly improved performance compared to standard production cells. But a key obstacle to turning their increased light absorption into increased power output is a significantly increased area of exposed silicon on the sidewalls of the pores and on the small mesas that remain at the top surface of the wafer itself. This increased area must be passivated, or treated to keep it from trapping the light-generated electric charges as they migrate toward the contacts of the solar cell, a process that robs the cell of output power.
Overcoming the Passivation Problem

Passivation is the process of filling the dangling atomic bonds at the surface of the solar cell, as well as reducing the numbers of defects that always exist in the upper region of the cell body. It is critical to enabling production of long-term, high-performance silicon solar cells.

To solve this problem Natcore's process began with an uncoated, textured silicon wafer that had an average reflectance of approximately 8%, giving it a mottled gray appearance. First, nanoscale pores were etched into the wafer surface by submerging it for a few minutes in a liquid solution at room temperature. Next, using the company's liquid phase deposition (LPD) process, Natcore scientists filled the pores and then over-coated them with silicon dioxide. This combination step both coated and passivated, thereby allowing lower reflectance. After the surface treatments were completed, the wafers were taken to the State of Ohio's Photovoltaic Research and Development Center at the University of Toledo, where the reflectance was measured.

Conventional cells, with anti-reflective coatings made via a chemical vapor deposition process that requires a high-temperature vacuum furnace and hazardous gases, have a reflectance of about 4%.

With black solar cells, the U.S. Department of Energy's National Renewable Energy Laboratory (NREL) lowered the number below 2%. Now Natcore's technology has reduced it to 0.3%, or virtually zero. 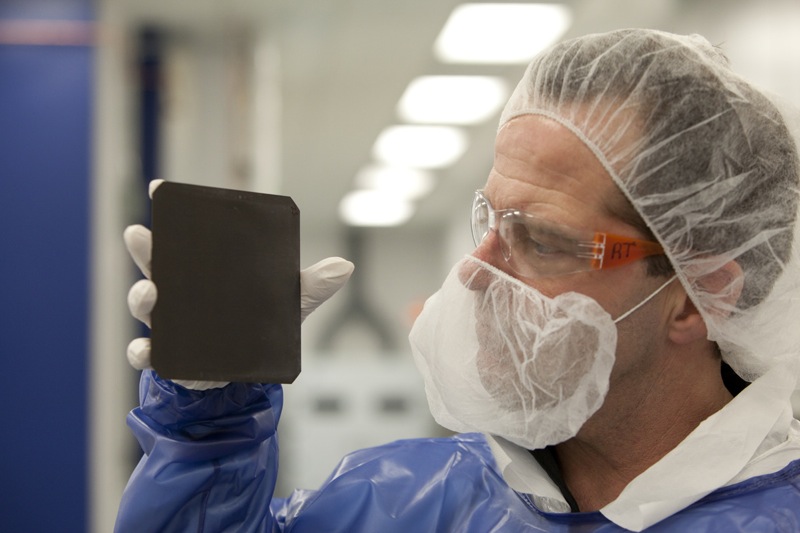 Natcore technician Rich Topel admires a wafer of "absolute black" silicon, which absorbs so many photons it could become the workhorse of the solar industry.

A tenfold reduction in reflectance would mean that up to 3% more usable light would get into the cell, effectively increasing the cell efficiency by that amount. (An 18% efficient cell becomes an 18.5% cell, for example.)

But there are additional benefits to be derived from using black silicon. A panel made from black solar cells will produce significantly more energy on a daily basis than will a panel made from cells using the industry standard antireflective coating. First, because it reflects less light.

Second, because it performs better during the morning and afternoon hours when the sun hits at an angle. It also outperforms standard cell panels on cloudy days.

"We are already working with two equipment manufacturers to design a production tool," says Natcore President and CEO Chuck Provini. "The tool would make 2,000 black silicon cell wafers per hour. We'll establish other parameters in our lab. When the design is completed, we'll take orders for the tool. We have already begun talking with potential customers in Italy, China and India."`

So don’t be surprised when you start seeing solar panels made from black silicon cells start turning up on roofs near you.


For More Solar Facts and Advice

To learn more facts and advice about a wide variety of solar related products and issues - use our built-in site & blog searching tool below. We have written more than 700 articles to help you get the most benefit from the sun.

Back from this page on the new black solar cell to our Home Page.