Why Stacked Solar Cells Could Be the Future of Solar

A new coating will trap 99.7% of the available light - including light during mornings, evenings, cloudy days, as well as the light during winter. For more information about this technology read our article on black solar cells.

Current solar technology only uses light from the lower end of the spectrum. Stacked solar cells consist of layers that produce electricity from the full spectrum light received.

The easiest way to think of it is by picturing two panels stacked on top of each other — only neither is getting in the other's way. The following picture illustrates the technology pretty well: 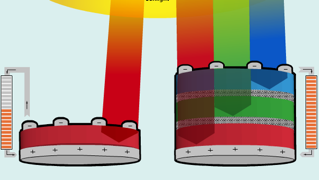 The image on the left shows how a top-of-the-line monocrystalline solar cell works. It's able to convert 17% to 18% of the sun's light into electricity.

The one on the right shows the Natcore stacked solar cell design, in which each layer is specifically engineered to absorb a different part of the natural light spectrum — something never before accomplished.

Changing How Stacked Solar Cells Are Made

While the two previous technologies are impressive, the real money maker is the simplified manufacturing process that makes it possible to produce these new stacked solar cells at a fraction of the cost of normal solar cells.

Natcore (a US company listed on the Toronto exchange) was formed to exploit technology, licensed from Rice University, that enables the controlled deposition of silicon dioxide and mixed silicon oxides onto a substrate from an aqueous solution at ambient temperatures and pressures. That technology is known as liquid phase deposition (LPD). Natcore is the exclusive licensee.

Silicon dioxide, or silica, is a fundamental building block in semiconductors, fiber optics and solar cells. It is an absolutely essential element in all these applications. It is currently deposited onto silicon through a process called thermal oxide growth.

Conversely, Natcore offers a liquid phase deposition (LPD), or wet chemistry, process that grows the AR coating in a relatively mild chemical bath at ambient temperatures. It uses low-cost equipment. It eradicates the need for silane and dramatically reduces energy requirements. By allowing for much thinner silicon wafers, it can lower silicon usage by more than 40%. It also enables the development of advanced materials and devices that would be destroyed during the standard thermal oxide growth process.
Moreover, LPD can utilize the waste materials from the initial production of the silicon wafers. And the effluents from the LPD process can be recycled or can be mixed with lime and sold to cement manufacturers for use in their production process.

LPD represents a potential breakthrough in cost that could spawn dramatic growth not only in solar energy but in other important markets as well. Natcore's LPD process has been independently tested and validated in an industrial laboratory setting at Battelle Memorial Institute, one of America's most respected laboratories.

The technology is now ready to be tailored to specific applications. And while it has many exciting potential application, Natcore is currently focusing on the area where it will have the greatest impact: solar energy.

Natcore does not plan to manufacture solar cells. Instead, the company plans to sell materials, deposition systems and licenses based on their stacked cell, LPD and black solar cell technology to companies that do so.

Because the AR coating is the final step in solar cell manufacturing prior to contact formation, and because the LPD process will utilize simple, low-cost tubs and a proprietary cartridge system, it is expected that Natcore's process will fold easily into virtually any silicon cell production plant.

Natcore, working with Hunan TLZ Solar Technology Ltd. in China has successfully tested the use of their LPD technology in the manufacture of existing solar cells and is working on the next phase of building up to the stacked solar cells.

To learn more facts and advice about a wide variety of solar related products and issues - use our built-in site & blog searching tool below. We have written more than 700 articles to help you.

Back from this page on Stacked Solar Cells to our Home Page.
Copyright © 2010-2013 Alchemie Limited Inc. Powered by Solo Build It